Our History Curriculum and how it has been designed

At Offham we use our Key Stage 1 curriculum to introduce children to the basic ideas of history as study of the past, looking at the development over time of certain aspects of society and some influential figures. Key Stage 1 ends with a study of Rural West Kent (where Offham is situated) moving from the Norman Conquest to the modern day, sensitising children to the scope of the British history aspect of the curriculum that is to come.

In Key Stage 2, the curriculum progresses chronologically, from the Stone Age to the modern day. We fell that this the best way to organise our curriculum, drawing on a simple chronology, the repeated retrieval of preceding topics and the cumulative development of a core timeline. 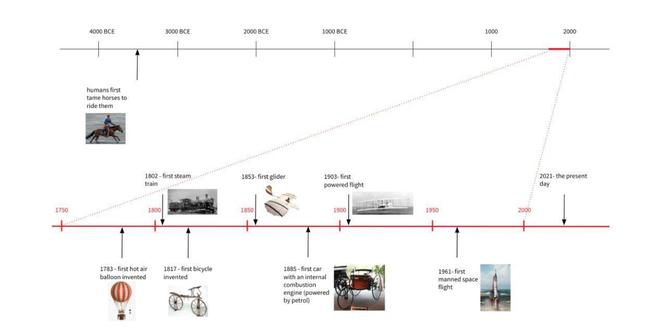 To re-emphasise this point, the exact same timeline scale (with the same magnified section) is repeated for a second topic in Year 1:

Again, children are still likely to be learning numbers inside 100, so there is no expectation that children will grasp the dates involved.

The core timeline from 4000 BCE to 2000 CE introduced in Y1 then forms the spine of all the timelines to be used in the history curriculum.

In Year 2, the children are gently introduced to a sense of scale. This is achieved by relating their own age in years to the age of the school. The age of the school – which notably is within their grasp of numbers inside 100 – is then visually comparable to the core timeline: 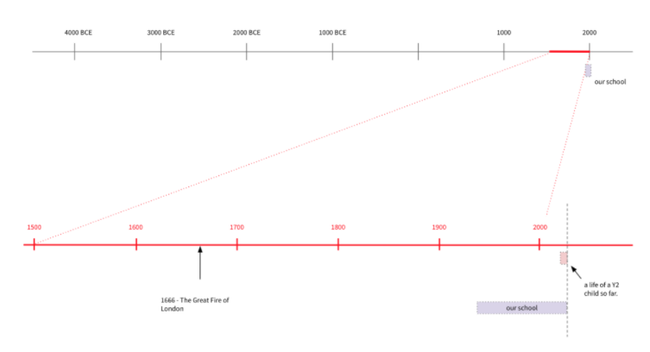 The main aim is for children to relate their own age to something else that we make familiar, the age of the school, and to grasp that things happened before they were born and that this can be visualised on a timeline. The idea of bars showing duration is introduced and children’s growing sense of multiplicative reasoning allows them to roughly grasp the relative scale of their life to that of our school. (Notice that as they grasp this key idea of scale and of a ‘zoomed in’ section, the rest of the timeline is kept exceptionally simple.) This is then emphasised in the next topic. Notice that this is the same core timeline with the same part magnified: 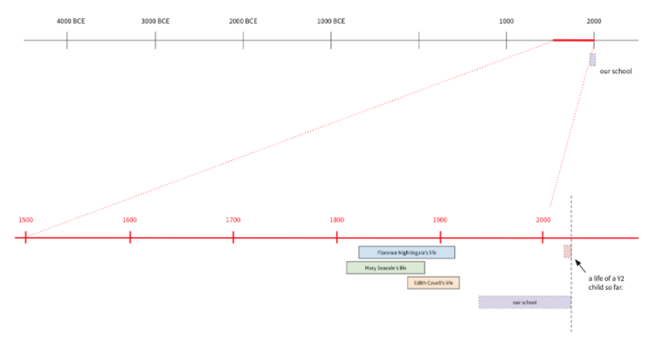 In the final topic in Year 2, the same core timeline is used with the same section magnified. In this case, the entire history of West Kent is discussed, sensitising children to all of the topics of British history that are to follow.

All of these ways in which the history of Peterborough overlaps with the periods of British history are then retrieved in the later topics in Key Stage 2.

It is worth re-emphasising that at each stage, the expectation of what children will grasp from the timeline is specific and limited. By the end of Year 2, we want children to recognise that timelines visualise the passage of time using distance and direction (usually left to right) and to visually grasp that their life to date is short relative to the age of the school, which is also short relative to the span of history discussed so far. We also want them to recognise that events and periods can be shown on a timeline.

All of the above lays the groundwork for the timeline learning that will follow in Key Stage 2.

At the start of Year 3, the now-familiar core timeline is related to the timeline of human pre-history: 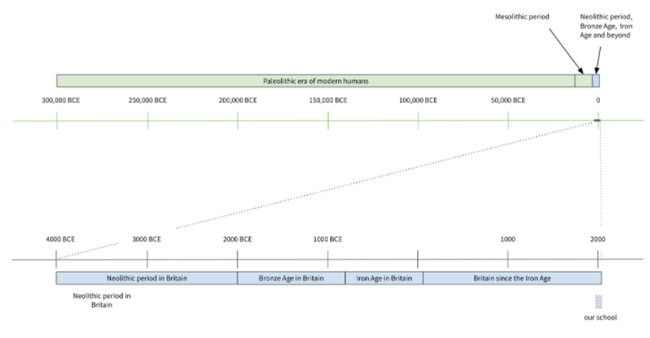 What do we want children to take from the timeline above? Only that all of history is relatively brief when compared to the time that modern humans have been recognisable as such.

After this, the process of building up the core timeline begins with the second topic in Year 3: 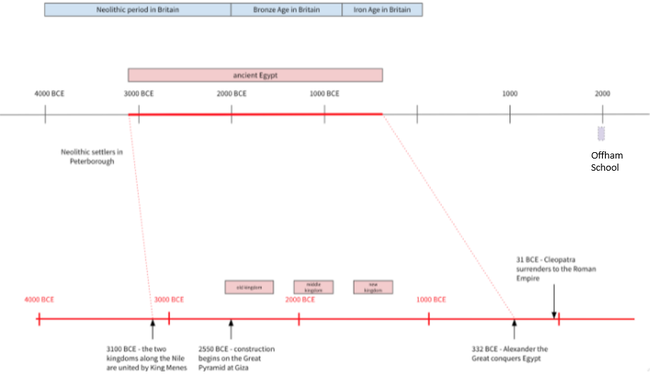 From now on, with every topic that is encountered, a new period is added to the core timeline so that it incrementally builds up:

Each new topic after this adds a new period to the timeline: 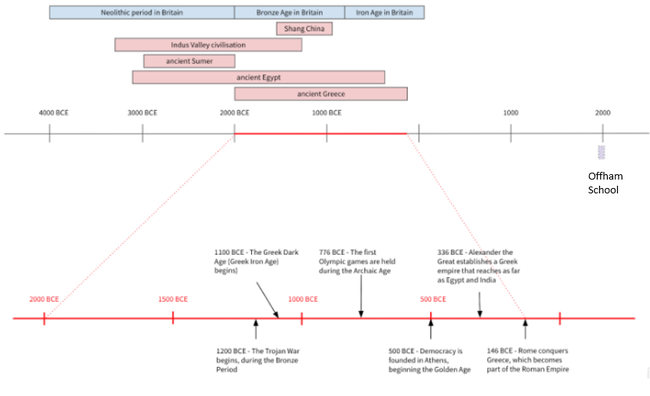 And so on. (Note the colour-coding of British history and history of the rest of the world.)

It is important to add that children will grasp that the periods studied are not the sum total of history, and that history didn’t begin or end at these points in these places. Instead, they will be guided to understand that these are merely the aspects we have chosen to study and that there are other fascinating and valuable periods of history in various places that we could have chosen. (In upper Key Stage 2, this leads into a discussion about the limitations of any history curriculum and the periods of time and locations that, inevitably, were left mostly unexplored in ours.) Maps are used in conjunction with the timeline in each topic to ensure that the sense of time develops alongside a sense of location.